Day lilies come in a variety of sizes, shapes and colors, and are hard to kill. But that toughness comes at the price of a short shelf life for the bloom - just once a year.

When Linda Ellis goes to bed tonight, she won't know until tomorrow which blossoms she'll bring to the Daylily Society of Greater Augusta's annual flower show, which takes place Saturday from 1 to 8 p.m. on the upper level of the Augusta Mall. Mrs. Ellis also will open her garden to the public for the first time Sunday during the open-garden portion of the show. She's eager to show how containers and raised beds can offset a small space with poor drainage to let 90 varieties of day lilies thrive. 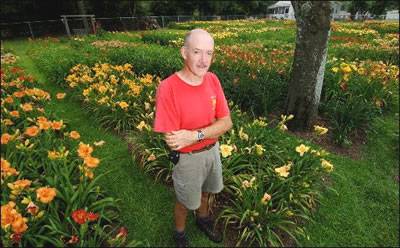 photo by Chris Thelen/Staff
Charlie Shaw has rows and rows of day lilies in his Augusta garden.

"They bloom their little hearts out, and you don't have to do too much," she said. "I think anyone would tell you if you're a beginner, get a day lily; you could barely kill it even if you tried."

Daylily Society of Greater Augusta President Charles Shaw said the tour, which encompasses 10 gardens around Augusta, is the highlight of the show. More than 300 flowers will be displayed and judged in the section of the Augusta Mall closest to Macy's.

"It's an opportunity to see vast numbers of both different cultivars and the number of plants growing in differing settings," Mr. Shaw said. "It gives them a perspective on things they might like, and ways they can be used in the landscape."

The mall show will focus on variety, whereas the garden tour will showcase the enormous number of day lilies in existence. Mr. Shaw's own Shaw's Sunshine Gardens, which recently was named an American Hemerocallis Society Display Garden, has about 900 varieties.

"You'll have very old, early to mid-1900s day lilies to ones that are as new as 2004 or even 2005," Mr. Shaw said. "Day lilies tolerate neglect, and with attention, they just absolutely thrive, virtually anywhere."