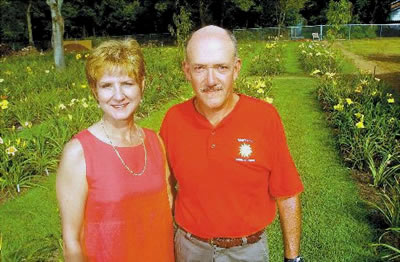 photo by: TREVOR FREY/STAFF
Charles Shaw left his $200,000-a-year job in England to start a day lily business from his mother's house off Lumpkin Road. Shaw's Sunshine Gardens has made about $1,300 in about a year. His wife, Debra, is a legal secretary in Augusta.

Just more than a year ago, Charles Shaw was living in England, earning $200,000 a year overseeing information systems for U.S. military hospitals in Europe.

Today, Mr. Shaw lives with his mother in his boyhood home off Lumpkin Road, growing day lilies for a backyard flower business that so far has earned him $1,300.

The irony set in this spring as he dug trenches for his next crop.

"My mother always told me to go to college so I wouldn't have to get a job digging ditches," Mr. Shaw said. "Here I am, with two master's degrees, and I'm sitting here digging ditches."

But selling flowers in south Augusta is exactly what Mr. Shaw wants to do. His work at Shaw's Sunshine Gardens is a refreshing 180-degree turn from the executive position he had at Science Applications International Corp., a Fortune 500 company that is the nation's largest employee-owned research and engineering firm.

He always was on call, said Mr. Shaw's wife, Debra, who works as a legal secretary at Augusta's Hunter Maclean law firm.

"We enjoyed living in Europe because we enjoyed the travel, but he always had to have the laptop and the cell phone everywhere we went," she said. "I thought this would be a good change for Charlie, and it was something that he wanted to do."

Of course, the drawback is that the pay also is a 180-degree turn from Mr. Shaw's former corporate job because most common day lilies cost as little as a few bucks each. 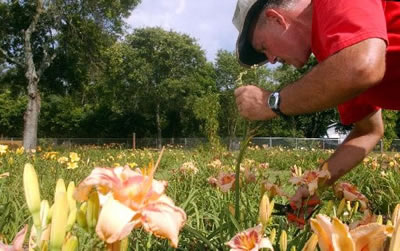 Photo by: TREVOR FREY/STAFF
Charles Shaw cuts dead blooms off of day lilies in his garden .

Although new varieties created by top hybridizers can fetch as much as $300, the 47-year-old Mr. Shaw is targeting the average homeowner and semi-serious enthusiast. His inventory of 2,600 plants, which he purchased from a variety of suppliers and hybridizers, sell in the $5-$85 range and have names such as Oriental Opulence, Night Embers and Most Beautiful Girl.

The Shaws only sell a few plants a week, but they don't need much in the way of income. Aside from Mrs. Shaw's salary, the couple has stock from Mr. Shaw's former employer, benefits from the Army - where Mr. Shaw retired as a major - and proceeds from the sale of their Washington home.

"We're not going to starve tomorrow if we're not making money," he said.

Primarily, the day lily business allows Mr. Shaw, an only child, to give full-time care to his 78-year-old mother, Jane.

"I started feeling like I needed to be back home," Mr. Shaw said.

He and his wife moved into his mother's home in spring 2002. After renovating the house to make two separate living areas, they acquired two adjacent lots and had them rezoned, giving them 1 1/4 acres on which to grow.

Although Mr. Shaw enjoys flowers and his mother was a day lily cultivator, his decision to create a full-scale commercial farm stemmed from researching the burgeoning day lily industry that supports the plant's growing popularity.

Membership in the American Hemerocallis Society, the official association for day lily enthusiasts, has doubled in membership during the past 10 years to 12,000.

"The day lily's popularity has really taken off," said James Brennan, of Bridgewater, Mass., who edits The Daylily Journal for the organization. "This business of making a living selling day lilies probably began only 15 years ago.

"Most people who sell them are doing so only to buy more seeds and fertilizer."

Mr. Shaw's initial investment, $100,000, is relatively cheap compared to that of many business start-ups. And the inventory, a hardy perennial that regenerates itself, is easy to maintain.

"There's not much other than water, food and sunlight," he said.

A fringe benefit to establishing the business at his family home is that he gets to beautify the neighborhood, which has become blighted with boarded-up homes and overgrown lots since he left more than 20 years ago.

"I can remember when Lumpkin Road was a two-lane with a dirt ditch on either side," he said. "It was a decent neighborhood. My goal is to get it to swing back."